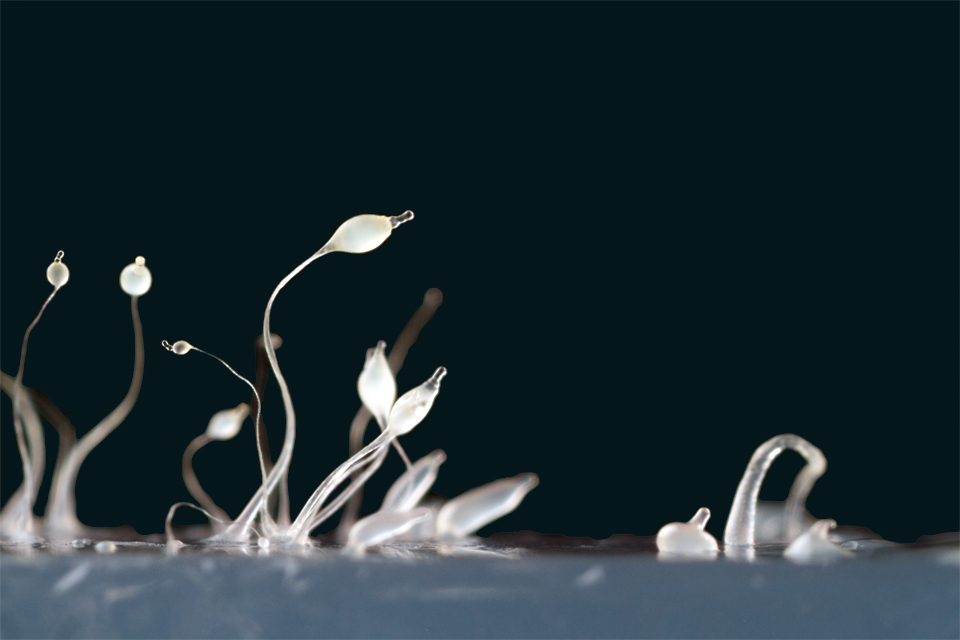 Main photo: Alex Wild
Multicellularity is an astonishing feat of communal sacrifice. With the exception of sperm and egg (the “germ line” cells), the 40 trillion cells currently in your body will dutifully perform their particular charge to maintain the whole, intricately arranging themselves to form your arteries, lungs, liver and brain, without ever having a chance to meaningfully reproduce. Many will die on command like fascist soldiers in a bad sci-fi movie. Even for the Genghis Khans of the world, a vanishingly small minority of the cells in the body produce descendants that outlive the individual of which they are a part. The primary imperative of life on earth is to reproduce (save for humans), yet multicellularity seems like a coordinated renunciation of that mission. Cells not in the germ line instead opt to specialize and curtail their reproductive potential (except for cancer cells) in favor of becoming part of something larger. Despite its seeming improbability, multicellularity has evolved dozens of times in the history of Earth, in both familiar and strange branches on the tree of life.

Animals and Fungi are two of the more familiar multicellular lineages and are both members of a group called the “Unikonts.” Indeed, fungi (like mushrooms, brewer’s yeast, and athlete’s foot) are much more closely related to animals than to plants. Amoebae, the microscopic, one-celled blob-looking organisms, are fellow unikonts, though more distantly related to animals than are fungi. One lineage called “social amoebae,” or cellular slime molds (Dictyosteliids), conduct their lives in a bizarre twilight zone between the unicellular and multicellular. Social amoebae scavenge for bacteria as single cells, roaming in forest soils. But when times get tough, they aggregate together and form a visible, multicellular being called a “slug” or grex, about 3 millimeters long. This “slug” then migrates to more bountiful scavenging grounds, where it forms a fruiting body (sorus) on top of a stalk and ejects amoeba spores (kind of like a mushroom). Here are some videos:

These organisms have much to teach us about how and under what conditions multicellularity evolved. Not surprisingly, some of the genes and pathways social amoebae use to guide the formation of the “slug” differ from those used in animals and fungi to direct the formation of their multicellular bodies. However, some aspects of cellular communication and development are similar across these groups. As (distant) relatives of animals and fungi, social amoeba inherited many of the same genes from our common ancestor. In frogs, humans, and mushrooms, variants of these genes encode molecular signals that cells use to communicate and direct the proper development and growth of multicellular bodies. In social amoebae, they regulate the formation of the “slug.”

Like other multicellular organisms, social amoebae exhibit self-sacrifice. The cells that make up the stalk of the fruiting body become rigid enough to hold the amoebae on top of them, and in the process die. This feature of “slug” behavior is of intense interest to those studying the evolution of multicellularity, and of the biological “altruism” that makes it work. The traditional explanation for the evolutionary advantage of altruism hangs on relatedness. You share roughly 50% of your genetic material with each sibling; if you die saving your sister from a burning building, she may live to pass on “your” genes to her offspring. Such is the cold, cruel logic behind the J.B.S Haldane quip “I will jump into the river to save two brothers or eight cousins.”

Such is the cold, cruel logic behind the J.B.S Haldane quip “I will jump into the river to save two brothers or eight cousins.”

The same logic underlies ant and bee colonies where sterile workers serve their mother queen, and the behavior of cells in multicellular organisms. A kidney or skin cell waives its reproductive abilities in favor of the sperm or egg, which shares 100% of its genetic material. This system of kin selection helps enforce strict discipline, since the evolutionary fate of individuals are tied into the future of the whole body or colony. With the bizarre exceptions of transmissable tumors in Tasmanian Devils and dogs, cancer cells in animals are ultimately doomed to go down with the ship; they have no means to continue their spread following the death of the individual from whence they came. This means that natural selection acts against alleles (genetic variants) that increase cancer risk in animals, since these alleles cannot be passed on beyond the proliferation of the cancer.

“Cheaters” are amoeba cells that reproduce rampantly, or suck resources from the whole “slug” without contributing their share; these cells are the rough equivalent of cancer cells in humans. However, unlike cancer cells in animals, each amoebae cell is capable of producing viable offspring that reproduce indefinitely. This means that “cheater” alleles in social amoebae could be advantageous in the context of natural selection, if the free-loaders can suck resources off the “slug,” and then jump off to reproduce on their own. However, “slugs” can discriminate kin from strangers, and aggregate with their relatives. This helps curtail cheating in the “slug,” since relatives of altruists are likely to share their altruistic alleles. “Slugs” with a high proportion of cheaters are likely to fail, so the alleles predisposing cheating behavior won’t be passed on.

Social amoebae are not a “missing link” between single- and multi-celled organisms; they are not our grandmothers but rather our distant cousins, and they have been an evolutionary success in their own right. There is no good reason to think they are evolving to become fully multicellular. However, the configuration of their life cycle, straddling the divide between single- and multicellularity, allows us to investigate the mechanisms and circumstances driving cellular communication and cooperation. We can see in them an alternate version of the rulebook by which we are built.