In 2012, The Melbourne Code was published. Though it sounds like Dan Brown’s next novel, it is actually the result of a week long conference of botanists called the International Botanical Congress (the next conference will be in Shenzhen, China in 2017), and it’s the eleventh revision of the International Code of Nomenclature for algae, fungi, and plants (ICN). The ICN is basically a rulebook for research regarding plants and algae and fungi, that includes rules about how to name them, how to publish information on newly discovered species, how authors should be cited, and much more. Why would it be necessary to have conferences on the naming of plants every few years? All it takes is a look at the history of one plant name to realize the difficulties, mistakes, and potential controversies surrounding a seemingly simple name. 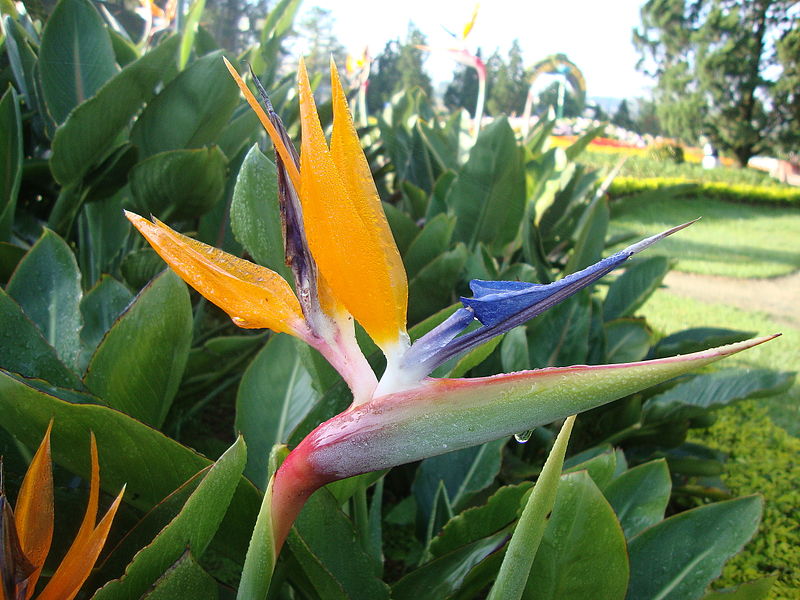 The flower of the Bird of Paradise Plant (Strelitzia reginae) and its leaves in the background. Photo by Prenn

This plant is one of my favorites; it has charmed me since high school when I asked a florist to incorporate it into a corsage and boutonnière. Like almost every plant, it has a number of names including “bird of paradise plant”, “crane flower”, “wild banana”, “isigude” (in Nguni), and “kraanvoëlblom” (in Afrikaans).

What’s crane flower? It is nor bract, nor flower, nor stem, nor root, nor any other part belonging to a plant . . .

Among botanists, these would be considered “common names”. Many plants have quite a few of these common names, but using only these different names makes collaboration and data sharing potentially difficult. To avoid confusion, all plants are given a Latin “scientific name” that can be used around the world.

To start with, it seems this plant was originally thought to be Heliconia bihai classified by John Hill, on several occasions. Joseph Banks, an English botanist, seems to be the first botanist to declare S. reginae as separate from H. bihai in 1773 and named it after Queen Charlotte, the wife of George III and Duchess of Mecklenburg-Strelitz  (the plant had been collected in South Africa by Francis Masson ). It is likely that his original description lacked enough details for him to properly publish his findings, so when William Aiton (a Scottish botanist) described it further in his book Hortus Kewensis or a Catalogue of Plants Cultivated in the Royal Botanical Gardens at Kew (see image below), his name was added to the end. While the explanation so far is well documented and full of Latin-y goodness, it is hardly the whole story. As one might expect, these old books of plants record only what those scientists knew for sure (the person who collected the plants, their own observations, etc.), and notably lack any research or information about the plants natural environment and natural history.

We know so far how this flower was given its scientific name (i.e. Masson found a pretty flower and sent it to Banks who named it after the Queen), but what about before that? What was it called before the scientific name was applied to it? Where did Hill/Banks/Aiton find it? Had anyone else found it before him?

S. reginae is native to South Africa, a place with a rich and complex history of different groups of people who may have seen and used this particular flower. While not quite definitive proof, books of traditional Zulu medicines list S. reginae among their contents, but these were written after its naming. As written records from the many people inhabiting or visiting areas in South Africa either didn’t exist or are lost, I doubt we will ever find out for sure who first began to recognize and name this flower. That doesn’t mean we can’t look at who it might have been.

We know the plant was officially given its scientific name in 1733, but can we ever know who first “discovered” it? Short answer: no. It is commonly known that the Dutch had established settlements in South Africa by this time. The English (in the 1600s) and the Portuguese (in the 1400s) had also been in the area due to the desire to trade with Eastern markets but the difficulty of sailing around the Cape of Good Hope. And even before this, though, a variety of groups (including the ancestors of Khoekhoe and San groups) have inhabited the South African region since the stone age (though not necessarily at the same time).

Of course, each of these groups of people likely had a different name for this plant, and some may not have paid it any attention at all. No matter what you call it though, this flower is beautiful and has an interesting history that tells us about the world . . . I suppose what I’m trying to say is “that which we call Strelitzia reginae Banks ex Aiton, by any other name, would be just as sweet.”