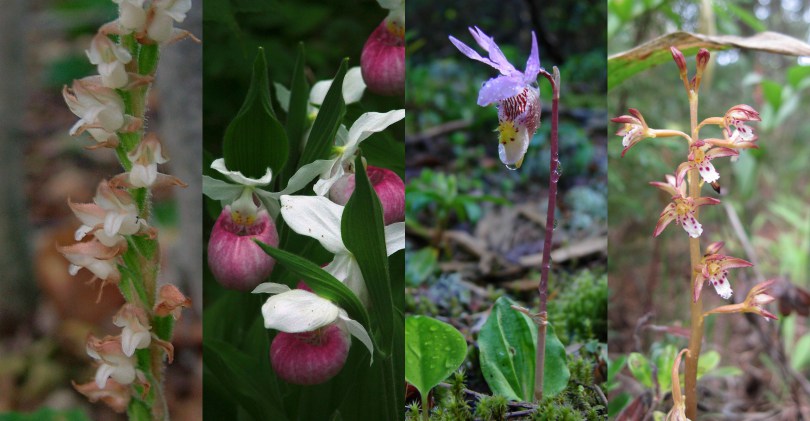 To make a long story short, orchids (plants in the family Orchidaceae) are awesome. They’re simultaneously treasured and cursed by horticulturalists for their weird and whimsical blooms combined with the difficulty involved with growing many orchids under less-than-natural conditions (remember me blathering on about mycorrhizae?). Thanks to human tinkering, orchids now come in virtually every color and shape, making deciphering those rose color-code-message dealies look like child’s play. But to me, the coolest things aren’t orchids that we’ve mucked about with (though those are REALLY cool); rather, their wild predecessors that have been shaped by their environment to do things that barely make sense and yet make so much sense.

I’m going to skip the more subtle orchid adaptations—some orchids have associations with fungi, produce pollen in bundles called “pollinia” instead of  the normal loose pollen powder, or re-create insect alarm pheromones to attract predators—and make a bee-line for the craziest adaptation I’ve heard of:  mimic orchids. These orchids, mainly found in Europe (though also Australia and probably more), have evolved over the millennia to look like sexy flies, bees, two kinds of spiders, and wasps (yes, the “bee-line” comment earlier was a pun, and I’m not sorry). There’s even an XKCD comic about the bee orchid.
But I’ll let Sir David Attenborough do the talking:

“Right, orchids are cool. I get it. But they’re not useful except for being pretty,” you opine.  False! Orchids play a part in practically every piece of cake, every crumb of cookie, and tons of ice cream. The vanilla plant (Vanilla planifolia, native to Mexico and first used by Aztecs) is an orchid, and its fruits are painstakingly cured to attain the richest flavors and aromas. But getting those capsules to even exist is tricky, as wild vanilla orchids are pollinated by Melipona bees, which don’t live outside of Mesoamerica, and frankly have a low pollination rate anyway. That’s why we have to hand-pollinate the flowers that grow anywhere else in the world (which is most of them). Every day, because each flower lives for less than 12 hours. You can probably guess why vanilla is the second most expensive spice (after saffron); give thanks to people with Q-Tips next time you have a latte.

“Fine, orchids are useful too, but I read that part up there about Mexico. I live in not-Mexico.  There are no orchids near me,” I hear you cry. Oh, you played right into my hands. Orchids are everywhere! Well, northern Nunavut, Greenland, and Russia plusTierra del Fuego get left out, but everywhere there aren’t, you know, glaciers. Orchids are found everywhere from tundra to tropics, which is less surprising when you consider that there are twice as many wild orchid species as bird species.

Michigan, for example, has 56 native species of orchid (plus one naturalized/invasive, Epipactis helleborine). Not quite as impressive as Florida’s ~100 species, but considering Michigan is rather not-tropical, and nearly half of the state is north of the 45th Parallel, it’s a remarkable number, and puts Michigan in the #2 slot in the USA for number of orchid species. Now, temperate and boreal orchids are often not as showy as their tropical counterparts. Species like the delicate 4 inch (~10 cm) spike of tiny white flowers that is slender lady’s tresses are easy to miss on a brisk walk through jack pine openings, so don’t feel bad if you’ve never thought about orchids outside of the tropics before. 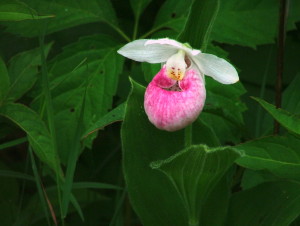 However, the well-named showy lady-slipper is much more obvious, even to the casual observer. Blooms are about the size of a billiard ball, if you include the sepals that form the “crown,” though the plant itself is usually only about 18 inches (~46 cm) tall. Some people just don’t realize pink and yellow lady-slippers are orchids, even though pinks (also called “moccasin flower”) are the state flower of Minnesota. 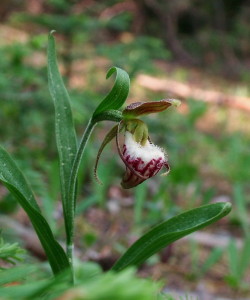 My personal favorite Michigan orchid is the ram’s head lady-slipper. In addition to being ADORABLE (the bloom is the size of the end joint of my thumb, at largest, and my hands would never be described as “beefy”), it’s rather rare overall, and I’ve had the good fortune to study its habitat requirements in one of the orchid’s more (if not the most) populous areas. I once counted over 50 individuals in a 1 sq m (~11 sq ft) plot; the entire area (about the size of a tennis court) was practically carpeted with the little plants, which is INSANE. I squealed with joy the entire time.

After all this cool stuff, I’ll finish on a sobering note. Many plants and critters of all shapes and sizes are threatened in some way due to the actions of humans: habitat loss, pollution, climate change, invasive species, etc. ad nauseum. Orchids face a little extra persecution; we love them to death. Poaching and stealing orchids from natural areas and from collections belonging to other people is a huge conservation issue worldwide. There’s a New York Times Bestseller novel about it. Some orchid “enthusiasts” even destroy orchid populations. Kind of a problem, especially in light of all the other roadblocks for orchids. This threat often keeps orchid-lovers from sharing their favorite orchid spots for fear of negative impacts by other visitors.

So, if you go looking for orchids, make sure you’re being the person Mr. Rodgers knew you could be; look your fill, then be a good neighbor and leave the orchids to thrive on their own.

Orchid Facts: Because you want to know morchid about them
Don’t be a borchid, amaze your friends with these facts
These plant facts are not a chorchid to learn
If you impress persons of the gender(s) of your preference with them, you could scorchid
I’ll only stop if you implorchid me
Bonus pun from Colin Roberts:  These flowers rock: I don’t joke orchid
Bonus pun from Alex Taylor:  Can’t wait to see what’s next in storchid