Despite their gross out factor, fecal transplants – essentially, a poop enema – have revolutionized treatment of Clostridium difficile, a violent diarrheal infection commonly acquired in hospitals. Many researchers (myself included) have excitedly speculated about vast number of potential uses for fecal transplants: treating autoimmune disease, gut disorders, and maybe even metabolic syndromes like diabetes. Indeed, fecal transplants are conquering medicine like the Mongolian empire: rapidly. It is truly a thrilling time to be studying fecal transplants: they are cheap, simple, and could change the way that we view ourselves and our ‘waste’.

But there’s trouble ahead, especially in an area as unexplored as the fecal frontier. As with any new procedure, fecal transplants may cause problems.

Last month, two doctors published a case report describing a woman who, after a successful treatment of Clostridium difficile infection with fecal transplantation, gained over 30 pounds in the 16 months following the procedure. Now, three year later, she is 40 pounds heavier than before the transplant and is clinically obese, with a body mass index – or BMI – of 34.5. Despite changing her diet and exercise habits, she has been unsuccessful at losing weight. Before the transplant, she had been lean; 136 pounds, with a BMI of 26. This problem had not been reported before in fecal transplant recipients. What was different this time?

The authors suggest that the weight gain could be ascribed to the donor, the patient’s daughter, who gained about 30 pounds (from 140 to 170 pounds) soon after her mother’s procedure. Could the daughter’s microbiome have caused her mother to gain weight? This is a neat hypothesis, consistent with data from animal studies: germ free mice inoculated with the microbiome of obese humans became obese, while those inoculated with the microbiome of lean humans became lean.

Though intriguing, this hypothesis rests on thin data. A sample size of 1 and minimal information on the daughter make extrapolation difficult. If the daughter was a healthy weight at the time of the transplant, how would her weight gain after the transplant cause her mother to gain weight? Unfortunately, the microbiomes of the mother and daughter weren’t analyzed before and after the transplant, leaving us unable to tell whether the fecal transplant contributed to the mother’s inexplicable weight gain. We can’t tell what parts of the microbiome ‘stuck’ (if any), so to speak.

In another (somewhat bizarre) case study, a researcher in Tanzania gave himself a fecal transplant using poop from a hunter-gatherer tribe, and has since lost a few pounds. And in a clinical control trial, obese men had improved insulin sensitivity after a fecal transplant from lean individuals, but were not followed up long enough to examine weight loss outcomes.

In the mouse study I mentioned earlier, obese mice that were housed with lean mice became leaner and developed a ‘leaner’ microbiome than obese mice who were housed together. Since mice are coprophagic (they happily chow down poop), this suggests that obesity may be moderated by exposure to a ‘lean’ microbiome**. 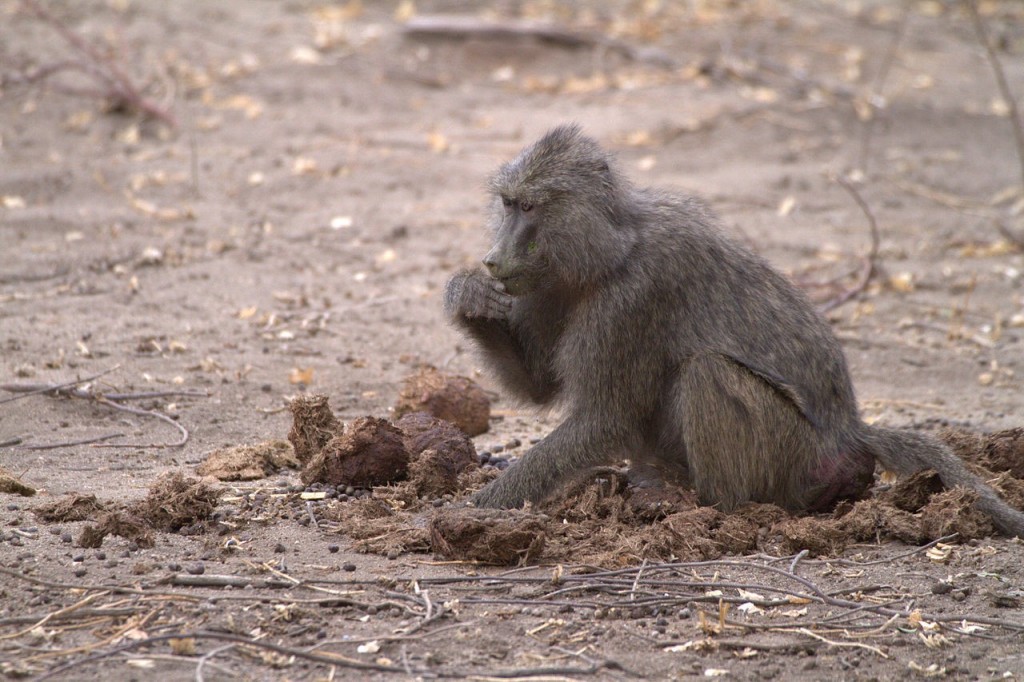 Mice aren’t the only animals who are coprophagic. Behold, a baboon eating elephant poop! Will that affect the baboon’s microbiome? Source: Markrosenrosen

Again, these studies are only suggestive, and much remains unknown. But we have the means to further examine this hypothesis without too much effort.

Fecal transplantation is quickly becoming the standard treatment for C. difficile (one of the most common hospital-acquired infection in the USA), constituting a large natural experiment on the effects of fecal transplants that is begging for a careful and nuanced scientific approach. Plus, some stools banks require their donors be a ‘healthy weight’, with a BMI<30, so many people receiving fecal transplants likely received a ‘lean’(ish) microbiome. Are there any obese patients who received a fecal transplant? What happened to them in the years after, and are they leaner now? If there’s a consistent pattern of weight loss, perhaps we should fund studies that examine whether fecal transplants could be an effective weight loss intervention.

Even if it could help with weight loss, the grossness of fecal transplants make them a tough sell – though a new pill form may make their acceptance a little easier to swallow. But think about other options that are often touted for weight loss: fad diets, superfoods, coffee enemas, medication. People even cut out a portion of their stomach to physically restrict themselves from eating. Compared to those options (especially if people are willing to try enemas), couldn’t a fecal transplant be worth a shot?

** In case you were wondering, lean mice didn’t become obese from exposure to obese mice, suggesting that while bacteria from the ‘lean’ microbiome are able to invade and colonize the obese mice, the opposite does not occur.