When European colonists arrived in North America, they marveled at the bountiful forests blanketing the landscape. One ecosystem in particular, the “oak openings,” caught their eye. Stout chestnuts, oaks and hickories littered the ground with nuts, providing rich food for humans and game animals alike. These massive trees stood far apart, letting sunlight to drench the understory and allowing for lush meadows in between, bursting forth with berries and wildflowers. Compared to the meager forests of Europe, which had been so heavily logged that there was no wood suitable for ship-building left, these plentiful forests were stunning to early colonists.

Yet these lands were not the pristine, untouched ecosystems of popular imagination. Native Americans had been shaping and fine-tuning the landscape for centuries, through sophisticated silvicultural and agroforestry practices. First among these was regular prescribed burning, which cleared the understory and encouraged the growth of fire-resistant trees like oaks. The resulting oak openings benefitted Native Americans both by producing more food in the form of nuts and game animals, and creating clearings where squash, corn, beans, and other crops could be planted. As Roger Williams noted “this burning of the Wood to them they count a Benefit, both for destroying of vermin, and keeping downe the Weeds and thickets” 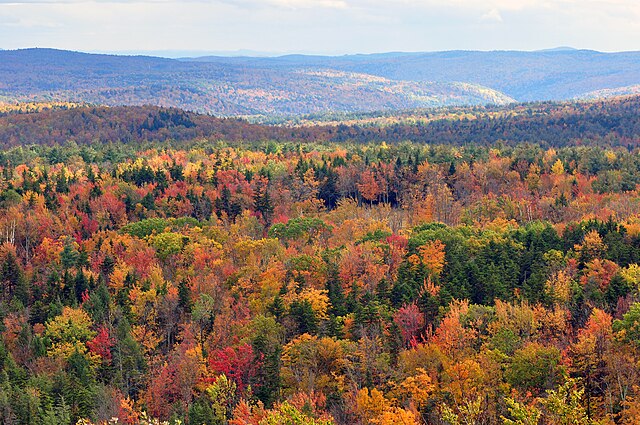 However, beyond a few preserved fossil sites and unreliable old accounts like those of Williams, there is scant information about the extent and ecology of pre-colonial North American forests. The uncertainty about the nature of these lost forests is a headache for restoration ecologists, historians, and anthropologists alike. Institutions like the Forest History Society are attempting to remedy this situation by collecting  all available information to build a cohesive view of how North American forests have changed since colonization, but this is an uphill battle.

The Grass Fire by Frederic Remington, 1908

In the vacuum of reliable historical information, a narrative was built up in the last two centuries: North America before Europeans was an untouched wilderness. This fabricated history is referred to as “the pristine myth” and is based mostly on eurocentric, “Noble Savage” views of hunter-gatherer Native Americans treading lightly across the landscape. This view has loosened its grip on the American public imagination as books like 1491 have gained prominence. Views of Native American forestry practices have swung so drastically in the last two decades that some are now cautioning against exaggeration, noting that different tribes used different silvicultural practices.

Over the last few centuries, Europeans-Americans have drastically changed eastern North American forests in a variety of ways, both intentional and unintentional: fire suppression, pollution, clearcutting, disease epidemics, the introduction of invasive species like earthworms. After intensive logging in the 1800’s and early 1900’s, North American forests have staged a major comeback. However, forests today have dramatically different composition than what came before, with species like red maple rising as oaks succumb to large deer populations and unfriendly fire regimes. Chestnuts and elms are a distant memory, lost to disease, with beeches and ashes following suit. Invasive newcomers like Japanese barberry and autumn olive are making their presence felt in areas previously dominated by native shrubs. Much has changed in the days since European arrival.

Today, oak openings exist in small pockets around the Great Lakes, mostly where sandy soil has allowed them to persist longer without burning. Local conservation groups work ardently to preserve and restore these magnificent ecosystems. If you ever find yourself in one of the remaining pockets of oak openings, take a moment to reflect on what came before.

As lovely as oak openings are, however, they will likely never come close to their pre-colonial prevalence. Modern Americans continue to shape the forest to suit our needs, and our forestry priorities are very different from those of the Native Americans who burned the forest. What may seem like wilderness is in fact profoundly shaped by the choices and priorities of the society living on it, as it has been for thousands of years, and as it will be in the future.

In the words of W.H. Auden, “A culture is no better than its woods.”

Brewer, Lawrence G., and John L. Vankat. “Description of vegetation of the Oak Openings of northwestern Ohio at the time of Euro-American settlement.” (2004). link