In previous posts I discussed the evolving debates concerning the geographic origins of Homo sapiens, and whether our ancestors interbred with Neanderthals and Denisovans. In both cases, a flood of newly available genetic evidence revolutionized our understanding of our past. But what about the more recent chapters of our history?

Almost every corner of the globe has been settled by at least one of the myriad human races and ethnic groups – Mayans, Bantu, Han, Russians – each with their own cultural, technological, and (to a far lesser extent) genetic adaptations to the lands they call home. And yet we all come from a very small population that lived somewhere in Africa ~200,000 years ago. What patterns of sex, migration, and settlement led us to become the exuberant parade of humanity we are today? On this front, too, DNA evidence from both living and fossil humans has helped clarify murky archaeological evidence.

The peopling of the Americas is one of the major puzzles of anthropology. The predominant hypothesis is that Native American people are descended from Siberians who crossed the Bering Strait during the last Ice Age glaciation, when sea levels were low and a land bridge straddled Russia and Alaska. However, alternate hypotheses abound, the archaeological evidence is not conclusive, and debates rage on – a scenario that should be familiar from the previous two posts in this series. 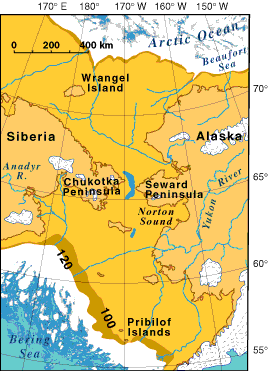 Beringia during the Wisconsin glaciation.

For example, it seems that some of the first inhabitants of the Americas, the Clovis people, had a different material culture (differently cut stone tools) than subsequent American peoples. Some have argued that the Clovis culture represented an entirely different group of people, perhaps descended from Europeans. This hypothesis may be fueled less by plausibility than by fevered hopes for a Western origin of Native Americans, but the archaeological evidence is insufficient to conclusively debunk it.

A recent study sequenced DNA from a fossilized Clovis child who died in modern-day Montana more than 12,000 years ago. This study concluded that Clovis people were indeed descended from Siberians, and likely got to the Americas over the Bering Strait. This is another example of a debate opened by murky archaeological evidence, fueled by racial and political biases, and put to rest by genetic evidence.

Genetic data from fossil humans provide the only evidence for such questions. But for a general picture of patterns of human ancestry, the DNA of living people, which is plentiful, uncontaminated, and fresh, offers a much richer story. In my previous post, I discussed how the more than 1,000 sequenced modern human genomes can answer question such as whether our ancestors mated with Neanderthals. However, to answer questions about which groups of modern humans are related to whom, we need a broad rather than deep sampling of genetic variation. Full genome sequencing would be expensive overkill; we need genetic data from many different groups of people, but less data from each person. This sort of data has been collected using a method called “haplotype mapping.” 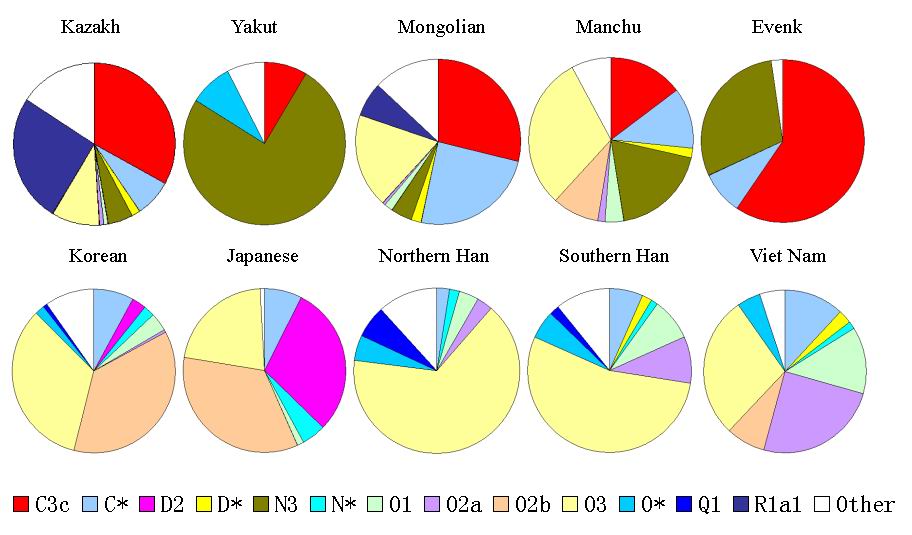 A haplotype is any long stretch of DNA containing many variants (polymorphisms) that is inherited altogether. Haplotypes break up slowly over generations as the DNA from mothers and fathers are combined to produce the genetic material in their children’s sperm and eggs (a more detailed explanation is at the bottom of this post). The slow breakup of haplotypes, and their many variations, make them ideal for studying ancestry.

The “mapping” in “haplotype mapping” involves recording which variants exist in different haplotypes, and who has them. This allows us to accurately trace ancestry and relationships amongst humans. For example, let’s say a particular haplotype with 50 specific variants in it appears in most Tibetans but no other people. If one person from Thailand has this Tibetan haplotype, it is good evidence that that person has Tibetan ancestry – it is extremely unlikely that those 50 specific variants came about independently in the Thai person. This is the kind of data companies like 23andme use to figure out their customers’ ancestry.

The large scale haplotype mapping of humans began in earnest in 2001, with the announcement of the International HapMap Project. This project aims to characterize frequency and variation in haplotypes across many distantly related groups of humans, for the study of disease and ancestry. Some groups sampled include Han Chinese in Beijing, Tuscans in Italy, and Yoruba in Ibadan, Nigeria. As you can imagine, this global study of racial and ethnic differences in DNA composition has been politically controversial.

More recently, competing databases such as Human Genome Diversity Panel have been set up to sample haplotypes more deeply (looking at more variants) and broadly (looking at more people). A recent large-scale haplotype mapping analysis used this data to yield a very rich and detailed story of human ancestry, which is browsable through this cool applet.

The analysis took advantage of the fact that haplotypes break up over time to estimate the dates of several major incidents of genetic admixture, and tie those back to the historical record. A statistical algorithm found genetic evidence for the Mongol empire, the campaign of Alexander the Great, and the Khmer empire, among other historical events. The algorithm also correctly identified the genetic mixture of Europeans, Africans and Mayans in Central America, and estimated that this started in 1670 AD,  only a few generations off the written record. Computer programs are admittedly not great students of history, but this cross-validation of genetic inference with recorded history adds a (pretty sweet) layer of confidence to these analyses. 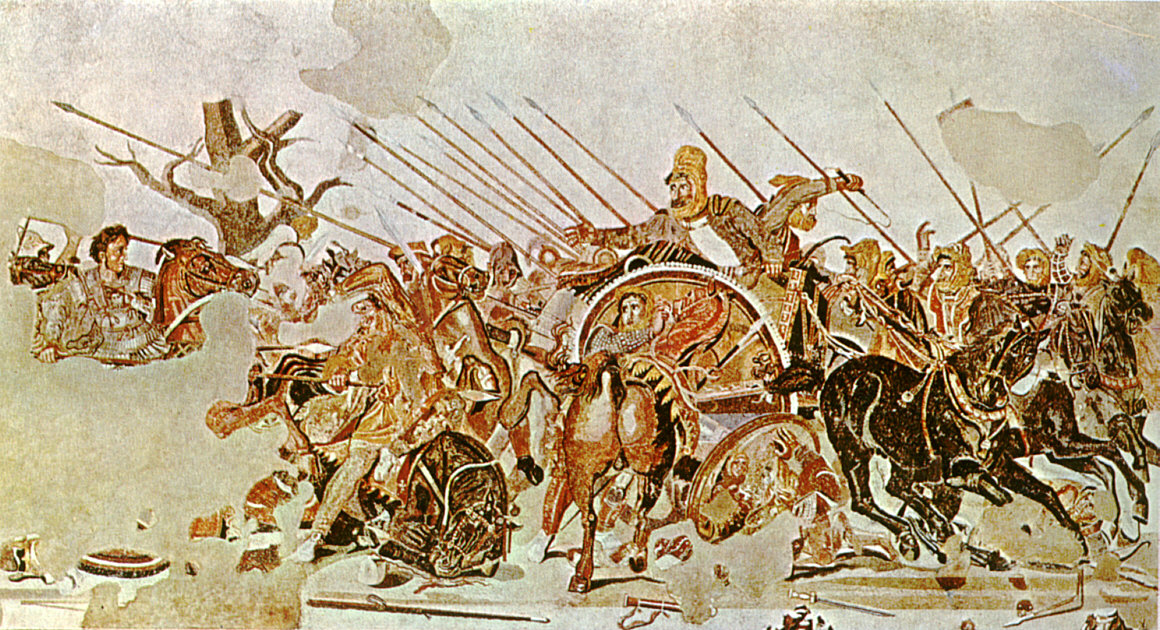 The prevalence of both covert and bald racism in many societies means that the scientific community (also not devoid of racism) must be very cautious in the presentation of this information. When information about genetic correlates of race clash against public misconceptions about genetics and fraught racial politics, that information may generate more heat than light. That said, these studies can help answer questions about pre-historical (and, to a lesser extent, historical) migrations, invasions, and sex. We can paint a clearer picture of the mysterious origins of the various peoples of Earth and their relation to one another.

To illustrate with an example, we’ll follow a chromosome from your biological parents to your (perhaps hypothetical) grandchildren: 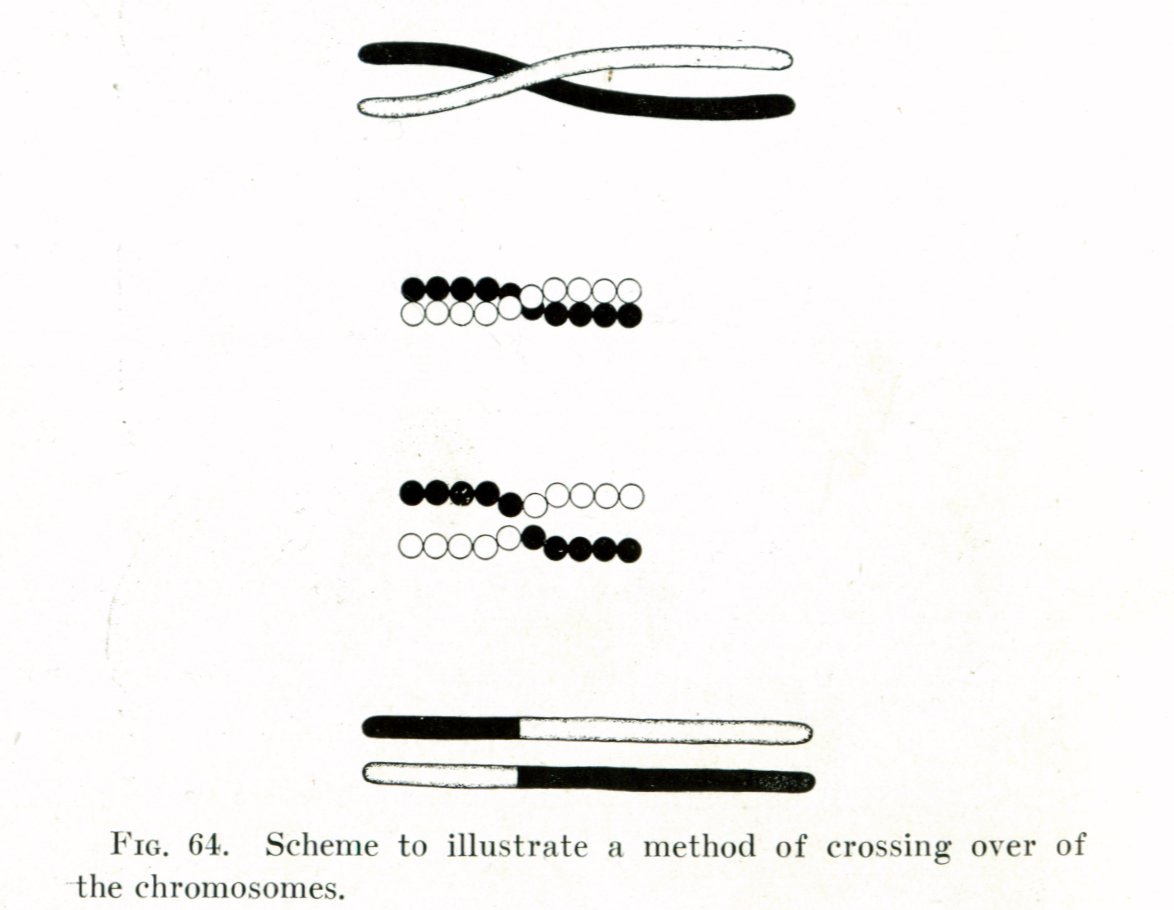 An original illustration of recombination from Thomas Hunt Morgan’s 1916 “A Critique of the Theory of Evolution.” Source: Wikimedia