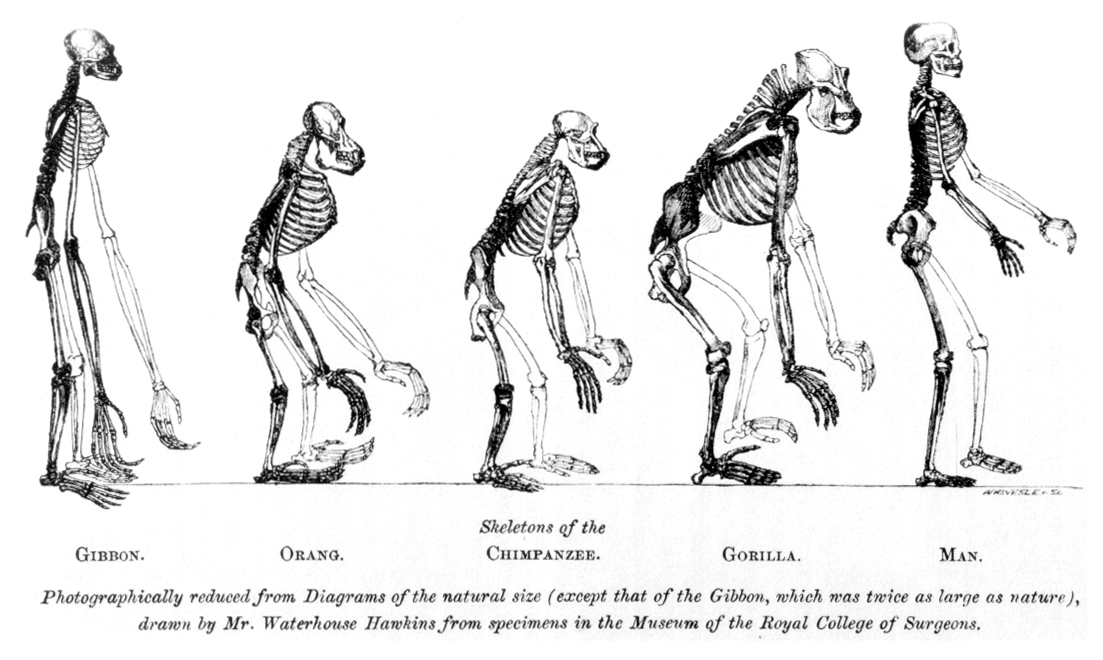 Main picture: Frontispiece to Huxley’s “Evidence as to Man’s Place in Nature” (1863). From Wikimedia

Ever since a skeleton from the Neander Valley was recognized as an extinct relative of humans in 1856, people have been captivated by the mysterious history of migration, murder, and mating by which Homo sapiens conquered the world. For a long time, a few scattered fossils and archaeological artifacts provided our best clues about who our ancestors were and how they came to inhabit nearly every corner of earth. That veil of obscurity is now being lifted as new DNA sequencing tools allow us to peer deeper into the long, fraught history etched in our genetic code.

The discovery of Neanderthals marked the first time we welcomed a fellow species into our genus Homo. From that point, fossils of our “congeners” (species in the same genus, and your word-of-the-day) started popping up all around the Old World. The discovery of Java Man in 1891 and Peking Man in 1926 (both local races of H. erectus) in particular caused a stir. By the 1920’s, on the basis of a few rather confusing fossil remains, anthropologists were hotly debating the relationship of all these “archaic humans” to modern Homo sapiens. In the absence of definitive evidence, but with a plethora of political and racial ideologies, two rival camps emerged.

Proponents of the Multiregional Hypothesis contended that the different races of humans had evolved in parallel from local H. erectus populations. That is, Peking Man was the ancestor of Han Chinese people, Java Man the ancestor of Indonesians, and Neanderthals the ancestor of Europeans. All of these “archaic humans” were one species, despite distinct differences in morphology, and all evolved in the same direction (towards modern humanity) in their isolated locales. Theoretically, this scenario is problematic: isolated populations normally diverge from one another, and eventually acquire [Dobzhansky-Muller] genetic incompatibilities that make reproduction between the populations impossible – this is the process of allopatric speciation. Furthermore, there is no good reason to think that humans living in South-East Asia would evolve in the same direction as people living in Siberia: the pressures of Natural Selection are very different in these locations. Despite these weaknesses, this theory scratched a deep itch amongst the many Eugenics-oriented anthropologists of the late 19th and early 20th century who sought scientific justifications for racism, and preferred theories that made the races more ancient and distinct. 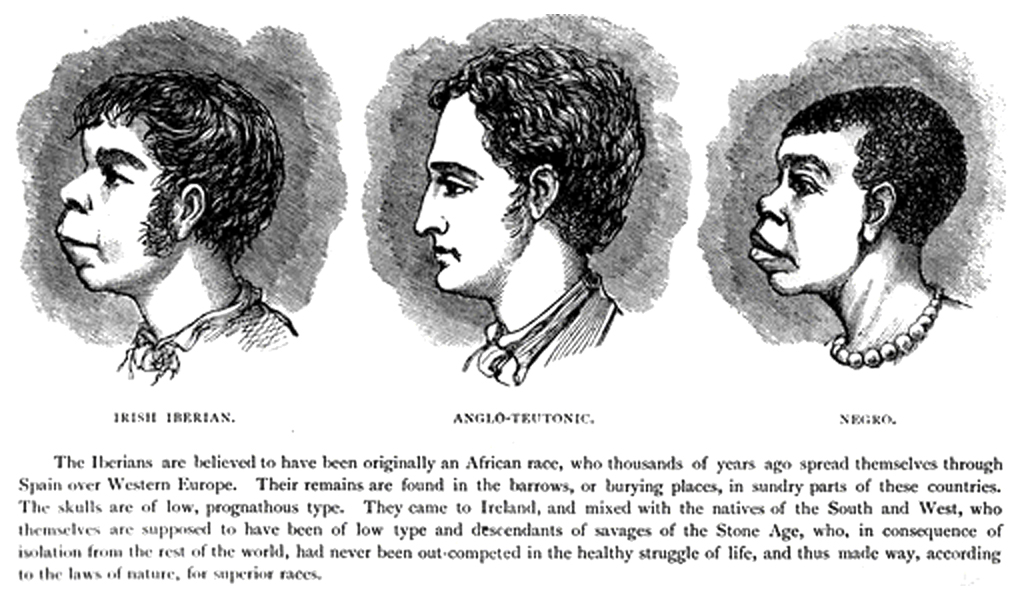 Even the great evolutionary geneticist Theodosius Dobzhansky, for whom Dobzhansky-Muller incompatibilities are named, contorted himself into buying this argument. He conceded that “It is highly unlikely that full species could converge to such an extent that the human races derived from them show no reproductive isolation at all.” But he brushed off this crippling weakness in the theory by assuming that all these fossils, now recognized as at least four different species, were actually only one. He then proceeded to speculate at length about how the “advanced” European genes from Neanderthals made it to Asia, and how Asians and Africans still had the clear imprint of primitive H. erectus in their skull shape. The Multiregional Hypothesis clearly held wide appeal, and apparently still does – when researching this post, I was surprised to find papers defending multiregionalism written as late as 2000, and only a few hundred feet from where I’m sitting right now at the University of Michigan!

The rival camp proposed a Recent Out-of-Africa Hypothesis, contending that local populations of H. erectus and other so-called “archaic humans” were replaced by a newly evolved single lineage of H. sapiens. This hypothesis, complete with an African origin of humans, was first proposed by none other than Charles Darwin, in his 1871 book The Descent of Man. Darwin’s politics on the issue likely aligned closely with his scientific opinion. Darwin’s family and immediate social circle featured quite a few abolitionists, and it has been suggested, notably in the book “Darwin’s Sacred Cause,” that abolitionist fervor in part motivated Darwin’s turn to biological evolution in the first place. Perhaps not coincidentally, Darwin’s mother’s side of the family were the Wedgwoods; many pieces of Wedgwood China feature this insignia on the back:

Brotherhood was the crux of the issue. Photo: Anselm

As you might expect, these debates got quite heated. However, the question of human origin is about real natural history in the physical world, not the political preference of anthropologists. It is a question tractable to scientific inquiry, and major efforts such as those of Mary and Louis Leaky were undertaken throughout the 20th century to find the various “missing links” in the human family tree. By the close of the century, the cast had expanded to about a dozen African hominins, as well as Denisovans, “Hobbits“, Homo heidelbergensis and many local races of Homo erectus. The fossils pointed to a Recent African Origin, yet the physical record still provided insufficient evidence; a handful of fossils and spearheads that carried far too little information to make a conclusive claim. And so, this argument simmered for decades, until genetic data finally provided the evidence to settle the debate.

In 1987, a groundbreaking study of mitochondrial DNA in humans concluded that humans form one lineage that evolved recently in Africa and spread from there. This study showed that Africans had the most genetic variation, and that populations farther from Africa have progressively less genetic variation. This is what you’d expect if humans had originated in Africa, diversified there for a while, and then small bands had broken off and travelled elsewhere. Each of these small bands represent a “bottleneck” of genetic diversity – a hundred people can only carry so many alleles(genetic variants). For the most part (except for recent mutations), the alleles of people in other parts of the world are a subset of those in Africans.

Furthermore, because we know roughly the rate that mitochondrial DNA evolves, we could tell how long ago different lineages of humans diverged from each other based on the degree of difference in their DNA – this is called “Molecular clock” dating. The close similarity in these DNA sequences showed that the “mitochondrial Eve” – the last common ancestor of all humans – lived about 100,000 – 140,000 years ago. H. erectus had left Africa about 1.8 million years ago, so this recent common ancestor is irreconcilable with a Multiregional origin of humans.

Many studies since 1987 have confirmed this interpretation, and the Recent Out-of-Africa hypothesis is now the mainstream view. But how long ago did modern humans leave Africa? How did we interact with the Neanderthals, Denisovans, “Hobbits” and others we found along the way? Did these other human species die off at our hands, or do they live inside us still? How did we fan out across the globe, and how are we related to each other today? Again, DNA sequencing has revolutionized our ability to answer to these questions.