I posted previously on how animals used for research are treated differently than those that are eaten. Since then, I have been reading about the criminal justice system in the United States (check out books here and here). I was struck by how much our prisons use solitary confinement. Humans are social creatures, and social research animals are guaranteed the right to interact with each under the Animal Welfare Act. However, prisoners in solitary confinement are almost completely isolated from human contact, meaning that some prisoners in the US have fewer rights than laboratory animals. 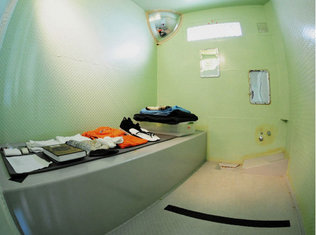 A view inside a cell used for solitary confinement. Source: Wikimedia commons

As I wrote earlier, under the Animal Welfare Act, laboratory animals are entitled to sufficient housing, food, medical care, and company (if they are social). Mice (and other lab animals) are nearly always caged with buddies of the same species since they have a “strong preference for each other’s company”. All measures should be taken to ensure that animals feel minimal pain and emotional distress. Under guidelines set forth by the Farm Animal Rights Council in the United Kingdom, animals also have the “Freedom from suppression of normal behavior“: they should not be prevented from behaving in typical ways.

Hold still and let me groom you! Source. Wikimedia commons

However, our criminal justice system does not do this for prisoners. Like pigs, mice, apes, and other animals used for research, humans are social creatures; we typically love company and thrive on making emotional connections. Friendships and family relationships are some of the most powerful and necessary pieces of our lives. Detention practices, such as solitary confinement and isolation, prevent prisoners from experiencing the basic human need for social interaction.

Some prisoners are confined in isolation for 23 hours a day, and have no interaction with other humans (except their guards)  for the short time they are allowed out of their cells. Prisoners can be placed in solitary confinement indefinitely, and some have been held there for decades. Studies dating back as far as the 1950s chronicle the effects of solitary confinement on mental health, observing time and time again that it can lead to anxiety, cognitive impairment, paranoia, suicidal tendencies, and many other problems with mental illness. In people with pre-existing mental illnesses like schizophrenia and depression, solitary confinement often exacerbates their conditions and can lead to hospitalization and “crisis care”.

Over the past year in California, prisoners organized long hunger strikes (some over 60 days long) to protest against extended solitary confinement. Some of these strikes have been suppressed with forced feeding.

“The differences between children and adults make young people more vulnerable to harm, and disproportionately affected by the trauma and deprivations of solitary confinement and isolation.”

Be careful with those brains! Source: Wikimedia commons

In a report by the ACLU, 49 of the 79 juveniles interviewed were kept in solitary confinement for between one and six months over the course of their stay. Many were unable to see their families during that time.

The wealthiest country in the world feels a moral imperative to provide humane conditions for laboratory animals. Regardless of the crimes they have been convicted of, prisoners are still human. While it is debated whether prison should punish or rehabilitate criminals, the US should at least be able to meet the criteria of the Animal Welfare Act for all of its citizens.

Metzner, Jeffrey L., and Jamie Fellner. “Solitary Confinement and Mental Illness in US Prisons: A Challengefor Medical Ethics.” Journal of the American Academy of Psychiatry and the Law Online 38.1 (2010): 104-108. link