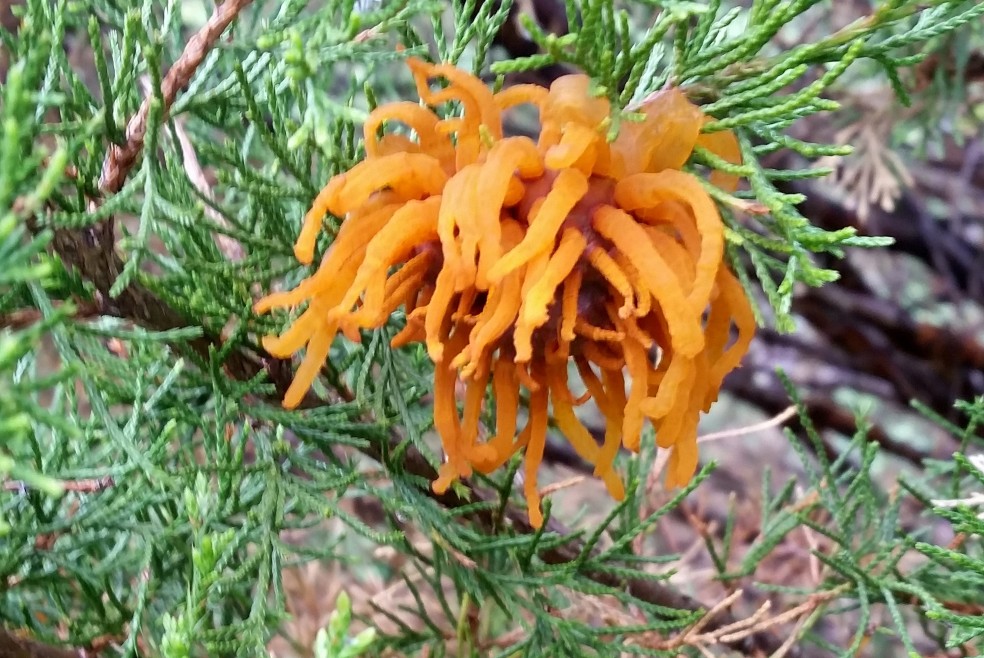 The aliens have landed?  All hail His Noodly Appendages?  Shiny Tangela?  Koosh gone wrong?  Or is this one of those Japanese cartoons…?

Ok, none of those; it’s a fungus fruiting on the branches of that eastern red cedar. I saw this gall (and quite a few more) on a hike the other week in Ionia County while dodging rainstorms.  It only looks like this for a few hours, and not just any red cedar can host it.  The crazy thing is, when the spores from this particular fungus are “forcibly released” into the air, they aren’t going to go infect more cedars.  They’re headed for nearby apple trees!  This is just one part in a two-part life cycle, which is pretty bonkers. 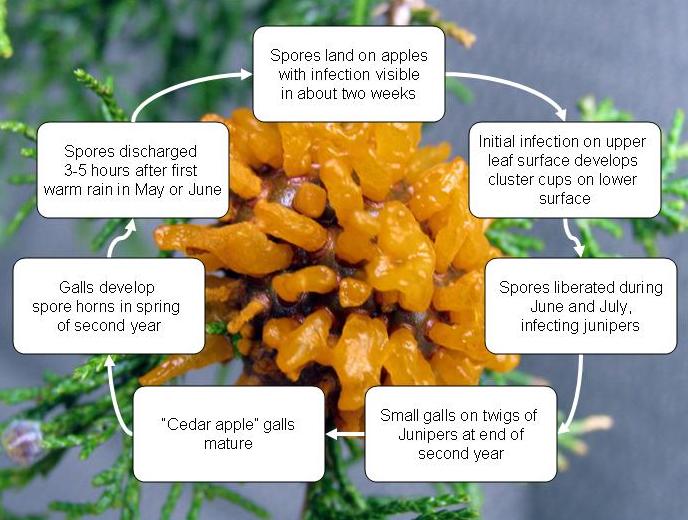 This two-host system is where the fungus gets its name, cedar apple rust (named for the rusty lesions on apple leaves rather than the goo-bits on cedars).  Obviously, the coolest part of this situation is when the telial horns get all orange and gooey after rain, because look at it!

The apple part of the life cycle is less showy, but more important to humans.  The rusty spots on leaves are unsightly and not great for the tree, but if the spore grows on a young apple fruit, the fruit becomes “unmarketable” (agricultural code for probably not poisonous, but super gross) as it feeds the growing fungus.  Then it releases a different spore that heads out in the wild world to find a cedar to bother. 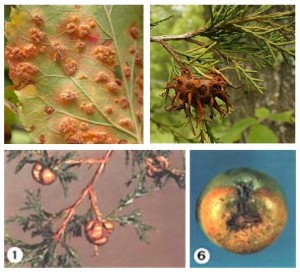 Non-gooey stages of an awesome (if problematic) fungus. Clockwise from top left:  rust spots on hawthorn leaves, dried out “cedar apple” after spore release, rust on an apple, first-year gall (before tentacles). Photos from Wikipedia and Cornell University

Though many orchards use anti-fungal preparations to prevent spores from growing on apples, an ounce of prevention is worth a pound of cure.  Most apple orchards remove as many plants in the juniper genus from the surrounding area as possible to interrupt the life cycle.

There are a host of fungi in the same family that affect other fruit trees, like hawthorn, crab-apple, and quince with very similar results, but since most folks don’t grow them for profit, there’s not so much worry about them.  Sorry fans of quince pie!

There are also, somewhat surprisingly, quite a lot of things in the natural world that require two hosts to complete their life cycle, like the trematode that gives you swimmer’s itch (using waterfowl and snails) and the bacteria that causes Lyme disease (deer and deer ticks).  Not all of them are bad for humans, but we know the most about those because more people will give scientists more money to study them; weird how that works!  Now go hiking after rain and find some jellyfish hiding in trees.