Almost all of us eat GMOs (Genetically Modified Organisms) every day, and most people question what that means for their health and the environment. But trying to get a straight answer to these basic questions about what we’re putting in our bodies can be a frustrating gantlet.

Information about GMOs online is confusing and tendentious, with contradictory statements made by the pro- and anti-GMO camps. To the pro-GMO camp, concern about GMOs is nothing more than scientific illiteracy fanned by fear-mongering, akin to debates about whether vaccines cause autism. To the anti-GMO camp, corruption in the government and the suppression of research by shadowy corporations like Monsanto makes scientific claims about the safety of GMOs dubious at best. There is a history behind these sentiments too, as large corporations have fought to keep growing public health fears under wraps on everything from tobacco to DDT. The debate about GMOs has been fueled by smoldering resentments on both sides, and now produces more heat than light.

Let me start by saying that GMOs approved by the FDA are safe to eat. There have been thousands of scientific studies testing this question, funded by many different countries and institutions, employing many different methodologies, and the picture that consistently emerges from these studies is that GMOs have no detectable negative health consequences. 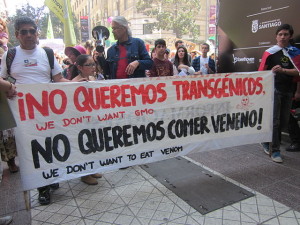 But that doesn’t mean that people should eat what’s put in front of them and stop asking questions, or that every concern about GMOs is illegitimate. When I’ve talked with non-scientist friends and family about GMOs, they have expressed a variety of concerns having little to do with scientific illiteracy or discredited research. Some of these concerns are philosophical or moral, reflecting uneasiness about “playing God” and tampering with nature. As the term “Frankenfoods” suggests, many people view GMOs as freakish grotesques cooked up in a lab by scientists gone mad. Other concerns are legal: the lack of GMO labeling disempowering their ability to choose what to eat, or the intellectual property laws that allow corporations like Monsanto to patent seeds and sue farmers who save them to sow the next year. 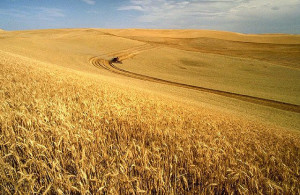 The economies of scale that drive industrialized agriculture are achieved by planting one variety of one crop (like corn, soy or a handful of other staples) on huge tracts of land, a practice called monoculture. Monoculture is economically efficient, at least in our current system of subsidies and penalties. However, it defies basic ecological principles and requires massive quantities of fertilizers and pesticides to maintain. These chemical inputs leach out into the water supply with serious environmental and health consequences. The fertilizers can cause toxic algae blooms in lakes and oceans, and the pesticides can have a variety of negative effects on ecosystems and human health.

Fertilizers are required because each plant in a monoculture field takes exactly the same nutrients out of the soil, instead of complementing and fertilizing each other as in polyculture or crop rotation. Pesticides are needed because row after row of identical crops, with identical immune systems and biology, are a paradise to any insect or fungus with the right constitution, or any weed that can compete against that crop variety. Pest populations can explode in a monoculture and destroy the entire harvest, so farmers douse their fields with a barrage of pesticides (insecticides, fungicides and herbicides) to keep them at bay.

GMOs have become a lightning rod for broader concerns about how our food is made, and at what cost to our health and environment. Unfortunately, this symbolic position is justified. So far, the primary (though not only) use of GMO technology has been to prop up monoculture by giving crops the ability to produce their own pesticides or tolerate those sprayed on them. For example, many GMO crops are “RoundUp Ready,” meaning that they can resist the herbicide glyphosate, the main ingredient in RoundUp (and a possible human carcinogen). In fact, many of the big players in GMOs, like Bayer and Monsanto, started as chemical companies far before GMO technology, and branched into genetic engineering as a way to boost sales of their pesticides. It’s no wonder GMOs have come to symbolize the conversion of bucolic landscapes into cold, corporate artifice.

As a scientist studying plant genetics who is concerned about industrial agriculture, I find GMOs deeply troubling. 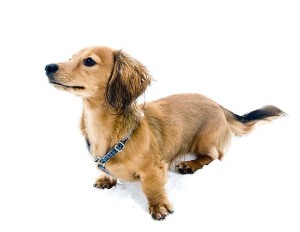 I’m not troubled about whether my food is natural, since “natural” is more a philosophical concept than a meaningful distinction in the world. I’m not concerned that we’re playing God, because I don’t think genetic engineering meddles with the natural order any more than we did in the past by breeding corn or dogs, and I like corn and dogs. I’m not worried by the prospect that GMOs are toxic or carcinogenic, because the evidence says they aren’t (though I am anxious that the pesticides sprayed on them might be).

I’m troubled because I see genetic modification as one of the most promising and hopeful technologies we have, and I worry that the way it has been used so far has been counterproductive and has sown widespread resentment and distrust. In using GMOs to maintain environmentally damaging industrial agriculture systems, we’ve conflated the technologies in our minds.

GMOs are a tool with enormous potential beyond industrial agriculture. Crops could be made to withstand drought or salinity, to provide better nutrition or reduce the harmful chemicals naturally found in some vegetables. Trees could be modified in ways that fight climate change, or clean up pollution, or produce higher quality wood. The possibilities are almost limitless. Though some of that potential is being realized – for example, we produce cheap insulin using GMO bacteria – too much of the promise of GMOs is being squandered to prop up an industrialized agriculture system that churns out fatty, sugary, garbage food and wreaks havoc on the natural world.

I’m also troubled that the debate about GMOs has become so heated and unproductive. Unfortunately, as is the case for many politically and culturally fraught scientific issues, polarization has spread to every corner of the debate and crowded out nuances and shades of grey. You’re either “pro-GMO” or “anti-GMO,” leaving little room for being “OK with GMOs but concerned about the patent law and lobbying surrounding them” or “excited about GMO technology but concerned about the way it’s being applied.”

The fact of the matter is that GMO technology, like almost any technology, has great potential for good or bad. If we take the time to weigh the evidence carefully and discuss the issues respectfully, we have a much better chance of creating laws and practices that are sensitive to both the promises and risks of the technology. Right now, we use GMOs to prop up a failing industrial agriculture system, but we could use them to bring a better life for humans while taking care of the environment. We’ll only get there if we can build a healthier debate.

Hayes, Tyrone B., et al. “Hermaphroditic, demasculinized frogs after exposure to the herbicide atrazine at low ecologically relevant doses.”Proceedings of the National Academy of Sciences 99.8 (2002): 5476-5480. DOI

Nicholls, Clara Ines, and Miguel A. Altieri. “Conventional agricultural development models and the persistence of the pesticide treadmill in Latin America.” The International Journal of Sustainable Development & World Ecology 4.2 (1997): 93-111. DOI

Pimentel, D. 2005. Environmental and economic costs of the application of pesticides primarily in the United States. Environment, Development and Sustainability 7: 229-252. DOI

Cover image: Google and the Google logo are registered trademarks of Google Inc., used with permission